A map of a city tends to show information that can help us to navigate from point A to point B, can give data that illuminates statistics about socio-economic populations or demonstrate the way that land (and water) is used. Maps tend be about empirical facts and hard assets, representing information that can be read and transmitted in a factual way. Where maps show us street names and intersections and distances between places, how are they indicating what actually goes on in these very places? What are maps leaving out?

This City, My Love (mapping the unspectacular in Saint John) is a project that I began last March in Saint John, New Brunswick. I went there for a month, and spent my time visiting with locals who brought me to sites that have special meaning for them. I wanted to learn about this city not from the perspective of a textbook or a tourist guide but from the people who make up the place that is “Saint John.” In a relatively short time, I got the strong sense that the people who are there are really invested in their city and work very hard to create an ongoing sense of “pride of place.” And by extension, make great efforts to increase the quality of life for fellow citizens. As an “industrial city in transition,” and a city that is largely overlooked by the rest of the country, I got a glimpse of how this place keeps having to reinvent itself.

One year later, in a second stage of this project, my wish is to construct an unconventional map of human encounters. Not quite a conventional map, but a mapping of emotional landscapes, via photography, field notes, drawings, collected artifacts and film, the exhibition recalls my visits, and reconstitutes this city out of the memories that were recounted to me. In a sense these have now become my memories as the stories I heard in conjunction with each site, and person, now become part of an album that uncovers the varied histories and identities that contribute to the rich tapestry that is Saint John. 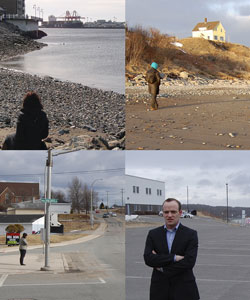